Ever considered playing golf on a Segway?  This has been on my golf bucket list for a while and finally the opportunity arrived when a golf partner organized a Segway golf outing. Here's a report of my first time to play with a Segway at Asia Toride Golf Club near Tokyo.


If you are thinking of trying this, there are two courses in the Tokyo area that have a Segway option: Tone Park Golf and right next door, Asia Toride Golf Club.  They are located just outside Tokyo and are riverside courses which means links like golf with few trees, flat fairways, and raised, korai greens.  Korai is the tough, native grass to Japan that is used on cheaper courses and is like playing on the bristles of a large scrubbing brush.  Both courses are a kind of Japanese muni with relatively cheap green fees and convenient access from Tokyo.


Training
At Asia Toride, you had to sign a release form when you got to the front desk, including a promise not to drink alcohol when you play(!)  After going to the locker room, the 30 minute training session begins. The instruction is all in Japanese, but a fair amount of the instruction is visually oriented.  If you spoke no Japanese and had never ridden a Segway before, you could still do it if you had a bilingual friend along. I found the Segway instructors here patient and helpful, even with my less than fluent Japanese.  And you only have to do the training once--they give you a card at the end of the round exempting you from future Segway training.


The hardest part of using a Segway is getting on and off.  It requires a little getting used to, especially the getting off part. Once your on, steering and controlling speed is fairly intuitive and easy.   I have to admit, I was still a  bit nervous at the end of the training.  Most of us were worried about using the machine on our own--we had pretty much forgotten about coming to play golf at this point.

Using the Segway on the Course
After the first tee shot, we were finally out on our own, without the safety net of a trainer nearby.  As I said, moving about is quite easy, but I didn't get comfortable getting on and off the Segway until after the third hole or so. Up to this point, I moved around cautiously--you do have to worry about sharp dips and awkward mounds and slopes. Then I started to feel comfortable and even a bit daring, like the rest of our foursome.  Moving around is certainly fun--it's simply a kick getting around on one of these things.  The feeling is not unlike riding a bike for the first time.

But this confidence can lead to overconfidence.  And one of the guys in the other foursome was playing around, waiting for a green to open up.  Trying to avoid another Segway rider, he made a sharp turn, hit a slope and was thrown from the machine.  He was alright, fortunately, and got right back on.

So here's how I would break it down for those considering trying this:

The Cons-
-First timers need at least an hour to complete
the training before play
-About ¥2,000 more expensive than regular
play, which includes a cart
-Not for everyone--our second group switched to
a cart after the first nine
-a bit of a hassle/unpleasant in the rain

In short, I would do it again.  But I'd prefer to try it on another course. 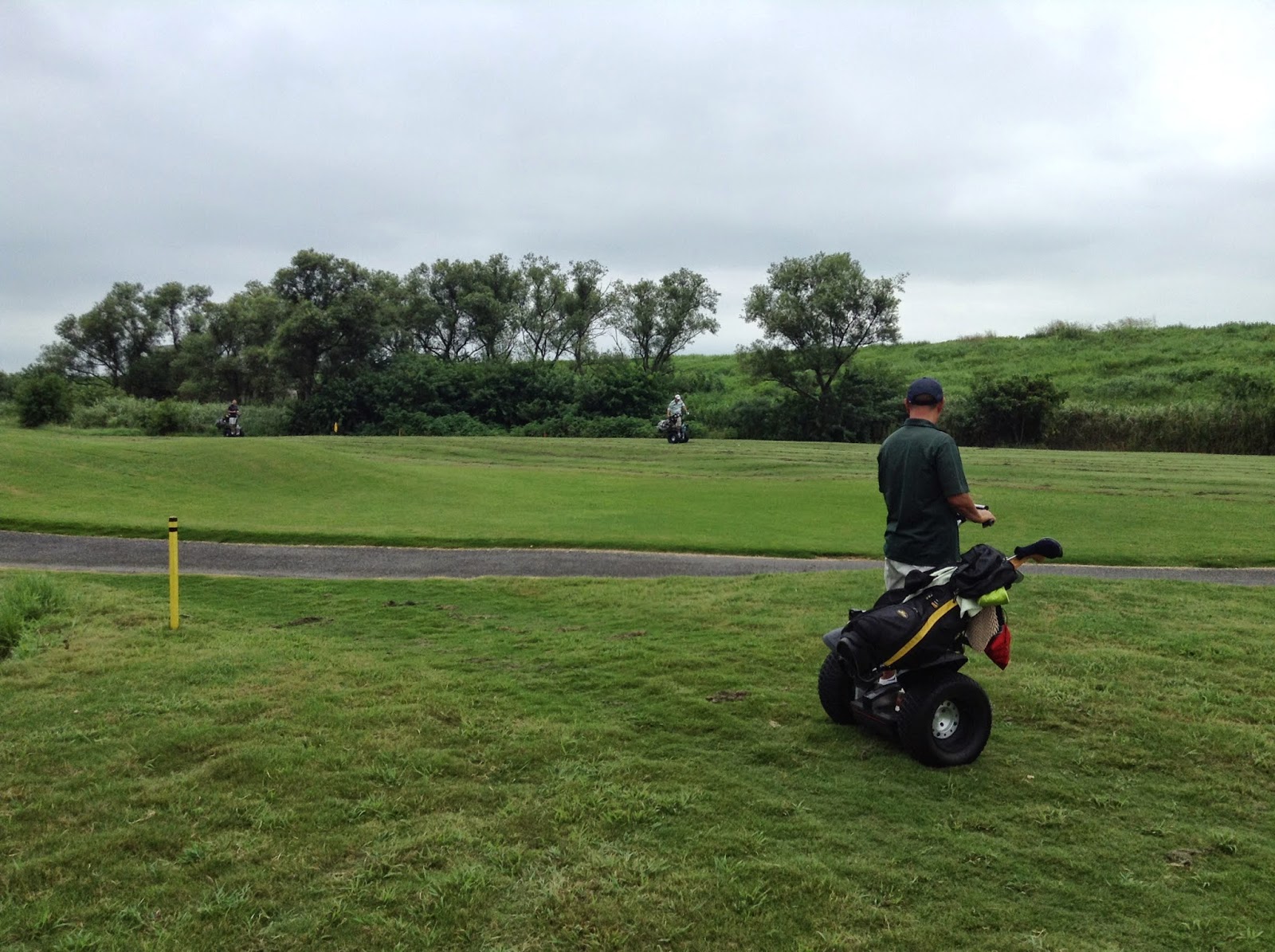 
Ah, yes, the actual playing of golf here.  Golfers seem to be in two camps in their judgment.  Some feel it's a great value (it received a golf magazine's "Value Course" award in 2005 and 2006) and is conveniently located.  They also appreciate the unpretentious atmosphere and the all-you-can-eat buffet lunch of various everyday dishes such as curry, miso soup, salad, and fried rice.


The other camp notes the short comings of the actual golf course.  It is flat, unimaginative, poorly maintained, has korai greens and can be quite windy.  It's been referred by posters on other sites as "a goat ranch" and as "crap."  When our members were asked what they thought of the course, most everyone answered with something like, "We're here for the Segway."


The Tone Park Course, right next to this course, is similar. It's a little nicer and more convenient (you can walk there from the train station), but more expensive. A round with a Segway will be about ¥5,000 more than one at Asia Toride.  I believe the Saturday round I played here was a total of ¥11,000 including lunch and Segway. And on the subject of money, Asia Toride only accepts cash, no credit cards.

OK, I'll admit Asia Toride still is not my favorite course.  But I still can't hate a track where I got a hole-in-one.  This happened on our 11th hole, a 165 yard par three.  I hit a seven iron right on line to the pin.  It took a fifteen yard jump into the air as it hit the front of the hard, korai green.  Nobody saw what happened after that.  When we went up to the green, we couldn't find it on the green or in back of the green.  I assumed it was lost in the penalty area twenty yards in back of the green.  So I chipped a second ball from there onto the green.  When everyone was on the green, another player got the pin and found a ball in the cup.  "Hey," he asked, "is this your ball?"

How to Use a Segway

1. Push the wake-up button dial on the dial near the
handlebars. 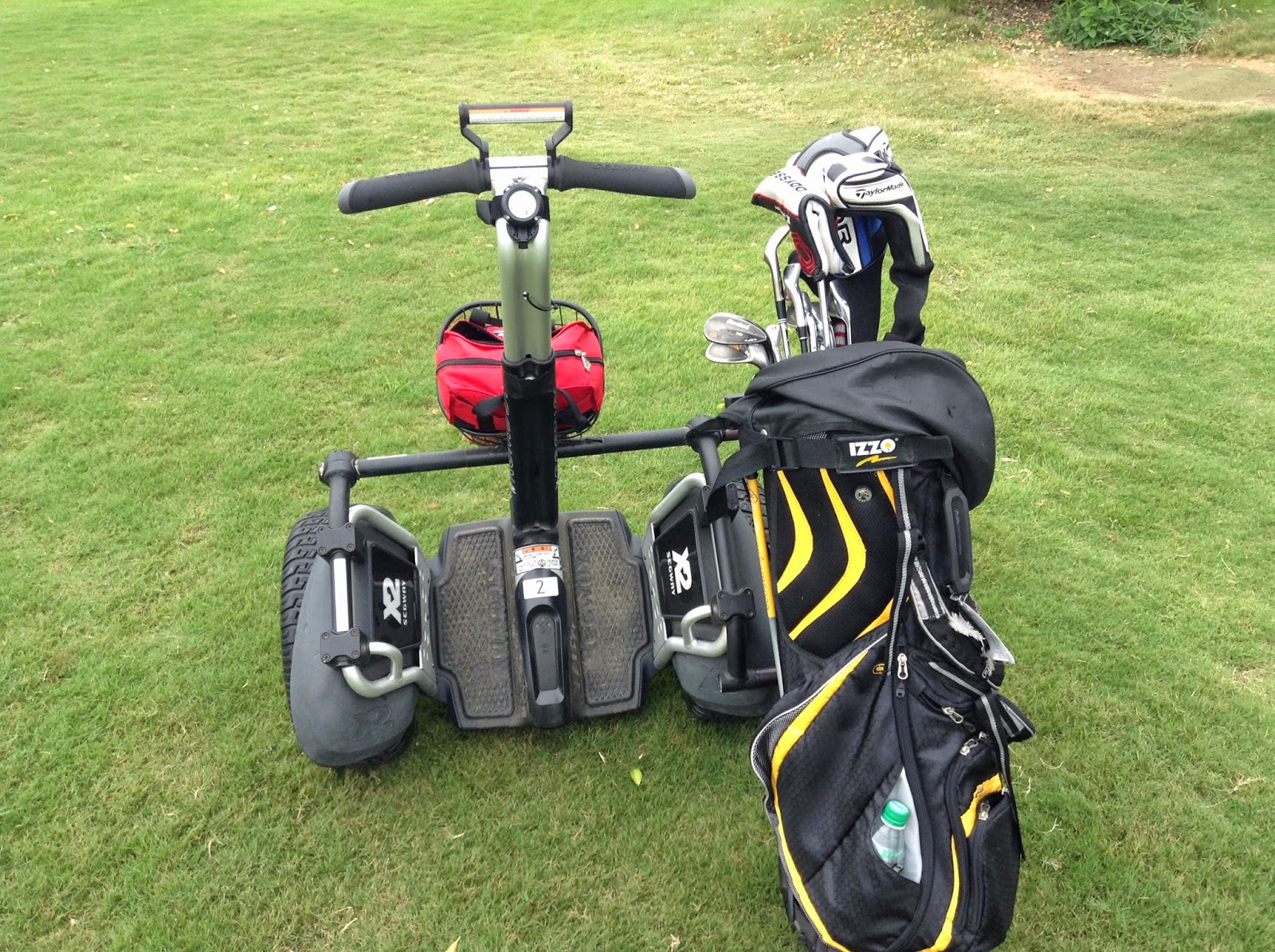 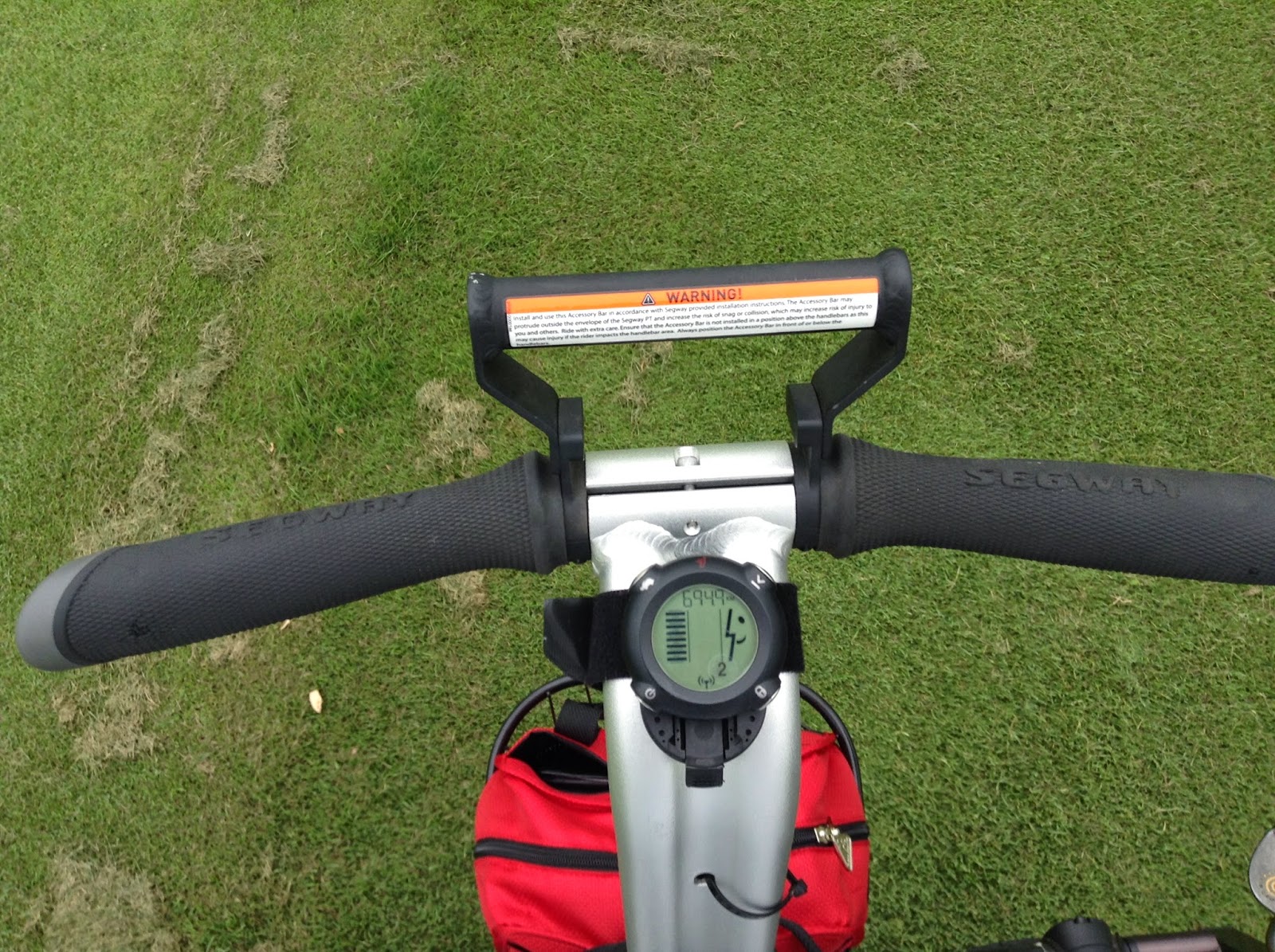 2. Move the Segway from the parked position to the
balanced position with the neck of the handle
bars. You can tell it is in the correct balanced
position when the red light at the footplate turns
to green. 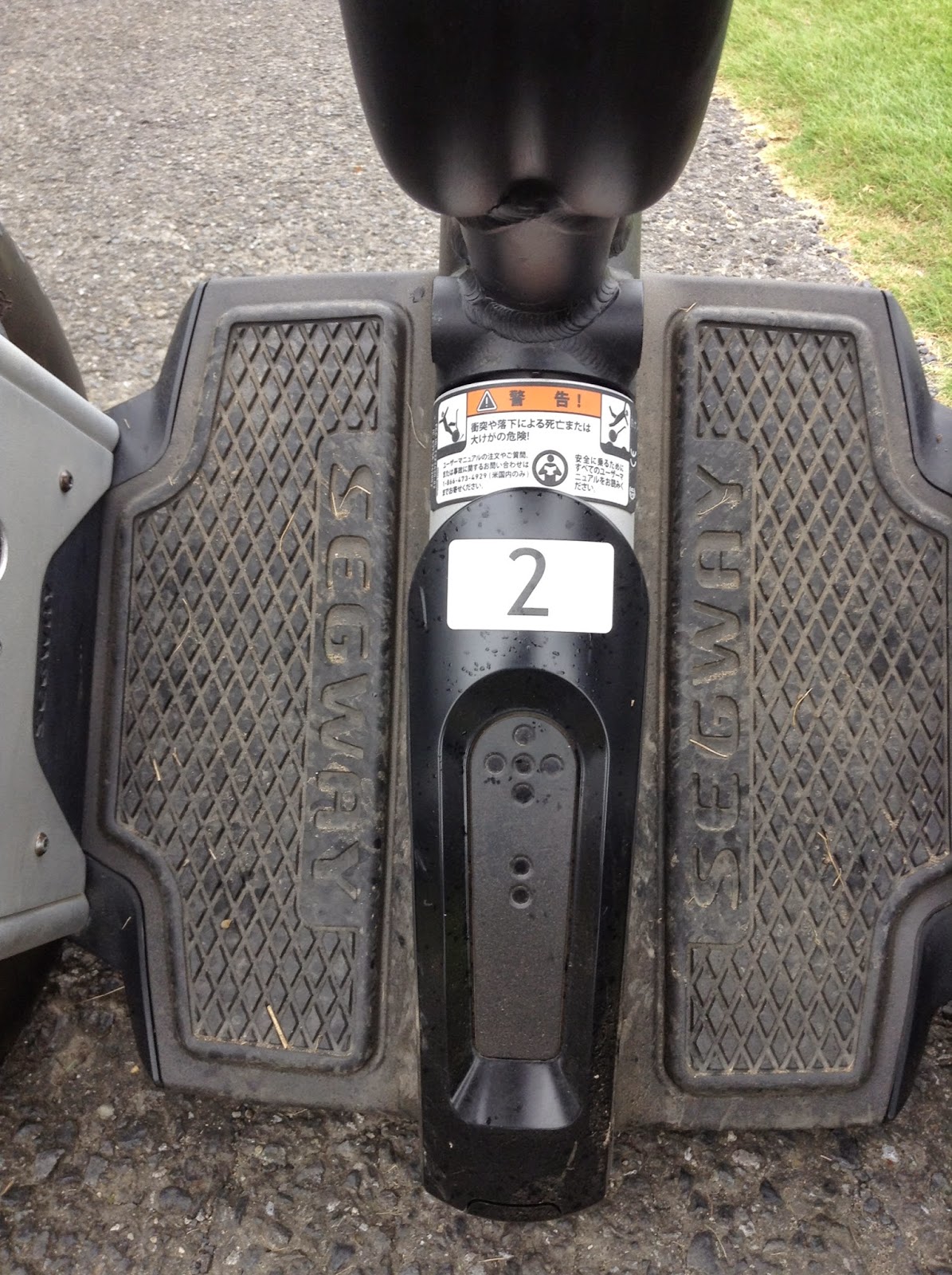 3. Step up on to the footplate using the handle bar
lightly to assist you.  Now you’re ready to go!

Moving About
Going faster or slower and turning are all fairly easy and intuitive. You can lean a bit forward to go slowly forward, or backwards, to make it go in the direction. Lean the handlebars to turn—you can even pivot and turn in 360 circles.

Getting Off
1. Hold the neck of the handlebars and step off quickly and confidently. (This is what I found counterintuitive and difficult, at first. Getting off slowly leaves the Segway still ready to move with the other foot still on the platform and the lean tells the Segway to back up over your foot on the ground. I did this a few times in the beginning.)

2. Pull the neck of the handlebars to bring the Segway into the parked position.

3. Hit the sleep button. Now you’re ready to get your club.